I'm going strong on the 24 day cleanse. I'm really loving it. I'm on Day 5.  I need to find some snack ideas.... bell pepper and hummus- love.  banana and some kind of nut butter- super yummy!  I have an organic sunflower butter that I love but it has salt in it so I only had a smidge of it on my banana last night... hoping I can find something all natural- or I could just grind up my own nuts/seeds and make my own.

Looking forward to restocking my fridge with some goodies from Costco.  I love their prices on Organic Spinach, Almonds, black beans, chicken.  Those are just a few of the things I'm going to be getting this morning.  I'm also going to get the TP from Costco.  I hear it's their top selling item and Julie has raved about it to me for several months now.  I'm all about good TP.  :)

With some inspiration from my neighbor I decided to do a 24 day Advocare cleanse.   I convinced 2 other girls to do it with me and placed the order. I thought for sure I wouldn't be starting until this weekend but the order was shipped the next day...so we HAD to start!

The hardest part of the cleanse is the fiber drink.  I had help from my 6 year old saying "chug it, chug it" and Justin Timberlake singing "that girl" and Michael Jackson's "don't stop till you get enough" helped me on Day 3... definitely needed a distraction to get that down.

Actually on Day 3 I only gagged once!  Which is huge progress!

I'm doing the cleanse with my friend Sarah- the other friend can't start until she's fully recovered from back surgery.  I definitely recommend doing any kind of diet, exercise program with a friend.  It holds you both accountable.  We text each other throughout the day with little encouraging words---like, hold your nose, close your eyes, get your 4 year old to say chug it and just down it.... that's encouraging, right?

The other thing I started was a "walking club" in my neighborhood.  I usually have 2-4 girls walking with me each night.  I definitely like the girl time and the feel of sweat.... gross but true! It means I did something!  We walk 3 miles at a pretty quick pace.  Sometimes slower than I'd like to go but I'm out there moving and so are they!  I added hand weights... 5lbs and that's not easy!

Day 4- no fiber drink.   No fiber drink until day 8.  I will survive!  It's supplements and clean eating.  Everything you should be doing.  I'm tired of processed food.  I actually like fresh foods.... so I'm hoping this will be incorporated into my family meal planning.  Travis is the best.... he's eating what I'm eating and Cade tried lettuce..... but trying it is a start!

Here are some pictures of our trip to Grapevine, Texas. 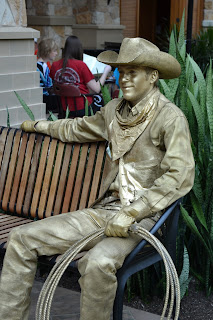 The Golden Cowboy at the Gaylord 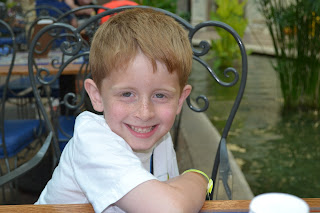 Dinner with Mama at the Cantina
tip: just order fajitas to share
(I had a cup of soup $7.  Cade had the kids quesadilla with chicken, apples and a drink....$9.
To add chicken to the two slices of quesadillas was $4.  AND he didn't even eat it because it was "gross".... meat, cheese, tortilla....I just don't get it.
Later that night Travis ordered fajitas- which Cade loved.
Meat, Cheese, tortilla.
Kids.
=) 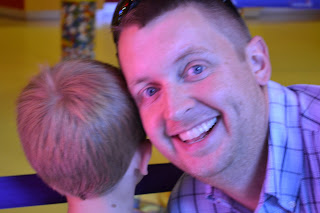 Someone didn't want their picture taken but we took it anyway! 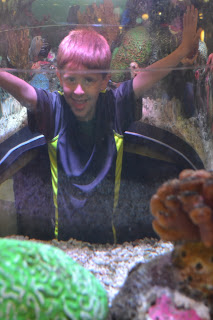 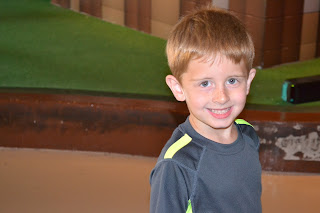 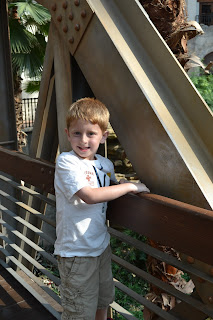 Taking a tour of the hotel property 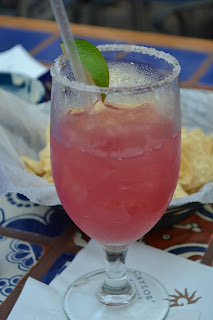 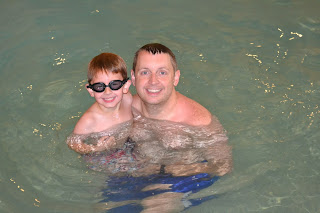 If we ever are able to have a pool- it has to be a saltwater pool.  No more burning eyes! 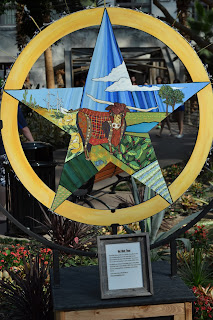 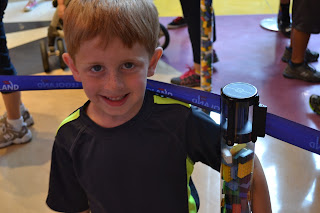 Waiting in line to enter LegoLand 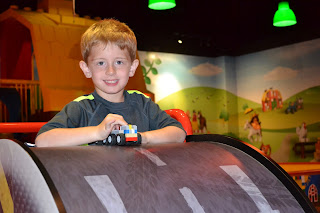 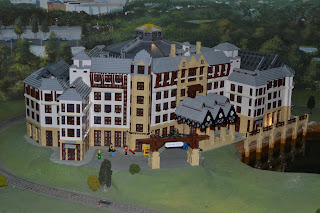 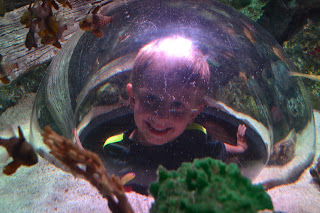 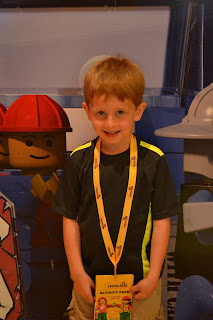 Lego Land activity pass
Earlier this month we took a wonderful mini-vacation to Grapevine, Texas.  We stayed at the Gaylord Texan for 2 nights and then spent one night at the farm.  The Gaylord was a beautiful hotel.  We had been their once before for the Grapevine Christmas but we stayed off site for that trip.  This time we decided to stay there and just enjoy ourselves.   We checked in around 2 and then Cade and I went straight to Paradise Island (the off site water park) while Travis slept.  Paradise Island has a lazy river, pool area, zip line, slide and splash area.  It was loads of fun!
The weather was perfect! I have to say Dallas is not nearly as hot as Houston.  I never once felt like it was that hot or that we were getting too much sun.  After pool time we came back to the room, changed, let Travis sleep some more and Cade and I went down to have a snack (the gross quesadilla--Thank God for margaritas).  After that we went on a walk in and around the property....probably twice around.  We saw the Golden Cowboy, the tallest cowboy (on stilts), looked at the art work on display, found the gift shop and the other 2 on site pools.
We were finally able to wake Travis up around 7 that night.  Cade wanted to go swimming at the hotel pool so we changed and headed down.  The water was super chilly...but I survived! It was around 9pm before we headed back to the room, to change out of our suits and eat dinner.  We rested well that night and got an early start on Saturday.  We ate breakfast at a really cute diner in town.... it was an Old West theme....can't think of the name.  Then we headed to NRH20 a water park just a few miles from Grapevine.  I went down my first water slide in probably 20 years- I thought I was going to flip off the tube and off the ride...Cade loved it!  They had an awesome children's area and the wave pool was a hit as well.  That afternoon we headed to the hotel - Cade and Travis went  swimming while I got a shower and some down time.  We met our friends for dinner that night at La Hacienda Ranch- very yummy meal. It was probably the longest meal I've had out in a long time.... we were at the table for over 2 hours with 3 kids!  They survived too!
The next day we had to check out...whah!!
We headed to Lego Land and then had a quick run through the sea aquarium- which were both really fun! Then it was so long Grapevine....and hello reality.  We spent the evening in Buffalo with Travis' dad then headed home that Monday.
We're already thinking we need to get away one more time before school starts....better get to planning! 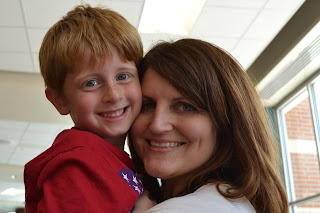 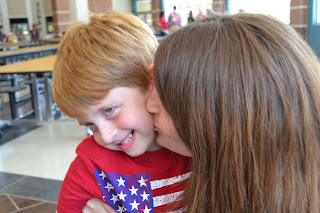 "ohhhh brother"  But I know he loves me! 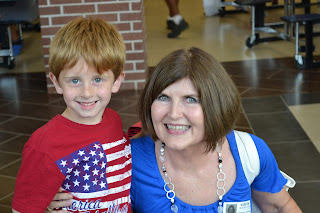 Mom came for "dazzle time" and the end of year performance. 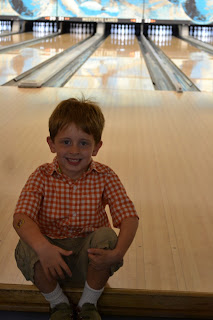 Bowling with Noni and Nene! 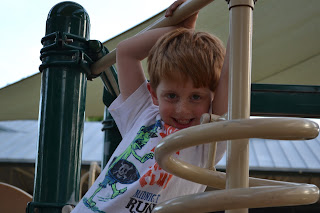 Just hanging around!
I promise he has had a haircut since these pictures..... his hair grows fast and thick!

I can't believe I haven't updated my blog since Christmas but really that was only 6 months ago and that's not too terribly long to wait for an update, right?  Right.

Cade finished off the school year reading above grade level (end of first grade)! Woo-Hoo! Proud Mama!  I'm so glad Cade loves to read and learn....school is definitely a strength of his!  Cade is still taking piano lessons- one lesson every other week.  He's really good when he practices.... just needs more routine practice.

Summer has set in and we're enjoying our long days and late nights.  I'm hoping I can get him back to an 8 o'clock bedtime but when it's still light out at 8pm, who can sleep? We just spent 4 days in the hill country, stopping frist in Buda.  We went bowling with Stephanie and Maxie- surprisingly Cade won! I came in with a close second.  We also went up to Grandma's house.  We spent a lot of time at the park on main street. We did manage to go to the LBJ Ranch.  They have a tour that runs throughout the ranch.  It was pretty interesting to see all the items they had out and the ranch was gorgeous. We're planning on going back in July.... after you hear your grandma say, "maybe you all should just move here and Travis can work for the police department...." How could you not plan a trip back.

Travis is working nights now...sleeping days. It works out pretty well.  He's up by 3:30 and home for dinner and can tuck Cade in to bed.  This fall I will be working full time!  I can't wait to have a real paycheck again....and to finally say "bye, bye" to the Camry.  I can't wait!

We're wanting to go on a mini-vacation this summer.  I'm not sure where we'll go but we need to get to looking.  Disney is set for Thanksgiving.  We'll be off all week and that will give us time to enjoy everything.

Well...there's mini update.  I will post some pictures tonight.