Tonight was the first pre-shift of the holiday market. I met up with Amanda and we directed traffic in the lot....vendors move in...vendors move out. We did that for an hour together then her shift ended and I was on deck, solo. I did have some company from some other girls- who were super nice!

The market looks like it's going to be a great success this year! My friends are going, and mom and all her friends and even Stephanie is making a special trip down! I hope it meets their expectations!

Tomorrow I have to work the mid-day shift. 11-3:30. I hope I don't pass out from starvation! Note to self: bring a snack. Then I have to come home and bake bread for Friday's shift... The only perk about baking the bread is that it's probably one of the easiest of all the possible recipes out of the JL cookbook to make.....or at least from the ones I picked from.

Friday isn't anything.....that evening, I'll probably head over to mom and Daddy's to visit with Maxie- My toothless niece. She lost her two front teeth and one bottom one this past weekend....and not by choice. A while back someone bumped into her on the playground and caused her tooth(loose tooth) to turn blue...she must have wiggled it for two months straight before the neighbor next to them was able to yank it out! The following day she had a run in with a tennis racket- she busted her lip and swallowed a tooth (we think) and another fell out (it was already loose). Poor girl!

So, Becky started posting on her old site and now I am too. I took a few minutes to go back and read some of my old posts and it brought back so many memories! This blog will be more about my life now as a mom-- and a wife and all the adventures in between. So enjoy and I'll try to post a few times a week or as time allows.
I dread time changes....but surprisingly it wasn't so bad this time. Cade went to bed last night at
8:30 and managed to only wake once during the night. I almost didn't get him but I hate hearing him say "mama...mama...mama" over the intercom. I just rocked him for a few and laid him back down. To my surprise I didn't hear those words again until 8:15. Yay for sleep!
I woke Travis up at 9 and told him that today is FAMILY DAY! We decided on visiting the Houston Zoo. We got there a little after 10 and managed to see it all in under 2 hours and learned a few things along the way. 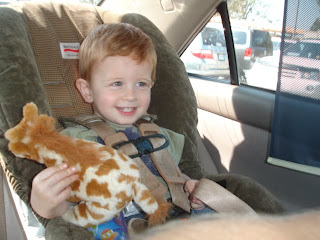 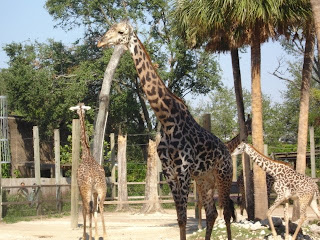 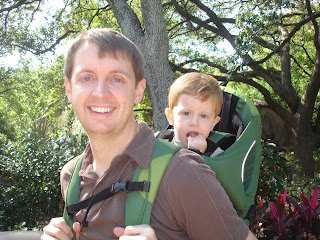 Interesting facts about giraffes:
The gestational pd for a giraffe is 14 months....and I thought 9 months was long.
Giraffes give birth standing up.
A baby giraffe when born can weigh 150 lbs and can be 6 ft tall.
Before we left we had an ice cream treat and purchased a little stuffed giraffe (we named him Barney). I'm pretty sure Cade likes him because he's holding him tight right now as he sleeps.